The story comes to you out of Bellflower California.
A homeless man by the name of Wilbur Schmidt was eating breakfast at a local Del taco that he frequented every morning. He ordered his usual breakfast burrito and hot coffee. After a couple of bites of his burrito and sips on his hot coffee he decided he had to use the restroom which was located outside of the restaurant. He walked around to the side of the building and open the restroom door. He walked into the somewhat clean bathroom stall 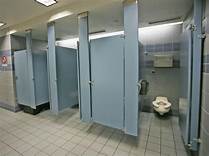 and did his trousers sat down and began his work for the morning. After sitting on the pot for a few minutes and finishing up his morning constitutional he reached for toilet paper which was not in the empty dispenser hanging on the bathroom stall to his right panicking he looked around and saw the temporary seat covers that are available in bathroom stalls. Reaching for one of the seat covers it became lodged in the dispenser, pulling and tugging for a seat cover to wipe himself with the dispenser started to fall off the wall. In a panic he shoved a dispenser back onto the wall as one of the fastener bolts of the Bathroom stall wall became loose and fell on the ground he noticed the bathroom stall wall start to lean and fall in his direction. Panicking he tried to stand up when he noticed that the toilet its self head started to tip and come from the wall as the bathroom stall wall fell on him the toilet itself had tipped over pinning his calves and feet underneath it. As dirty water and feces started to spill all down the back of him he screamed out help help can anyone help. To no avail nobody showed up to assist him. Pin there in the once was a bathroom stall which is now a pile of rubble on top of him he thought his way out of the bathroom stall door. Standing there with his pants to his ankles soaked to the bone and staring at the rubble of bathroom stall  he pulled up his pants cleaned him self up a bit and marched right out the door and into the restaurant. Approaching the front counter he yelled at the attendant.  Did you not hearing me call for help? He screamed. As he explained to the employee of the restaurant what traumatic situation had just happened to him, he noticed The Del taco employee

had begun to smirk and laugh at the situation. Just then another Del taco employee had approached the counter hysterical in laughter at what he had heard. Schmidt shouted you think this is funny? I’ll be back with my attorney. Grabbing his half eaten burrito and his cup of coffee stormed out the door. The next day Schmidt had consult an attorney which had told him if you had pictures of the scene it would be more ammunition to sue the restaurant. So Wilbur Smith went back to the Del taco restroom with his camera phone in hand and began taking pictures of the destroyed bathroom stall that was still laying in a pile in the middle of the bathroom. As he was taking pictures he noticed the restaurant employee had come up behind him and was standing in the doorway. The employee demanded what are you doing? Why are you taking those pictures. Schmidt replied I am taking photos to prove what had happened to me yesterday in your bathroom and the way I was treated by you and your employee. The Del taco employee vigorously tried to grab Mr. Smith’s cell phone when Mr. Smith snapped a shot of him and did a two-step and made his way out the door. As Schmidt was running to his car he could hear the employee threaten him and tell him not to return. Well Schmidt did get his settlement of $30,000 after suing the establishment . Del taco rewarded him also free food for a year. Schmidt does not frequent any Del taco establishments to this day. And he has told his family never too go to Taco Bell as well. So I guess the moral of the story is don’t sit in your shit unless you’re willing to be paid handsomely for it

This is a weird and strange funny story written by Denny Stelly.

Be on the lookout for more strange and funny stories to be posted on this blog site in the near future.